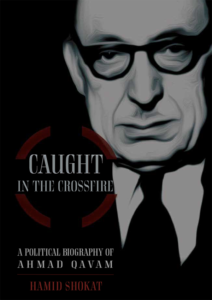 Hamid Shokat has authored a most informative political biography of Ahmad Qavam (Qavam al-Saltaneh), one of the outstanding prime ministers of Iran during the twentieth century.  Shokat’s biography of this controversial statesman, The Political Life of Qavam os-Saltaneh (2006), has been rightly applauded for its judicious use of archive material and his evenhanded and scholarly approach to issues which can still fuel heated debate among contemporary Iranian intellectuals.

Ahmad Qavam was one of the most prominent and influential political figures of twentieth-century Iran, renowned for his dealing with Stalin, which facilitated the solution of for settling the 1946 [Iranian] Azerbaijan crisis’ stalemate, following the Soviets’ violation of the Tripartite Pact.

Hamid Shokat‘s political biography on Qavam, secretary, governor, grand-vazir, prime-minister, diplomat, and political operator, makes a relevant and highly readable contribution to modern Iranian history and politics as well as to Iranian biographies. Focusing on clear-cut, verifiable information, Shokat steers clear of the haze of rumors, slander, and conspiracy theories. He has produced a soundly documented and multi-dimensional history of an intriguing, self-conceited, talented, multi-faceted, shrewd, and skilled politician, who despite or rather because of his old Qajar socialization, was needed by the Pahlavis more than once.

The book is a balanced, no-nonsense, and engrossing biography as much as an introduction to Iranian politics in the first half of the 20th century, written with acumen and great insights into various phases of Qavam‘s political life as well as crucial events in twentieth-century Iranian politics. There are few comprehensive texts on Ahmad Qavam in European languages. Ghanoonparvar’s English translation offers fluid, engrossing reading, making also accessible the broader trends of Iranian politics of the late 19th and first half of the 20th century to a non-Iranian and non-specialist readership.

The fifth edition of his book. Caught in the Crossfire: A political biography of Ahmad Qavam, one of the most pivotal and controversial figures in the twentieth-century political history of Iran, has been published in winter 2021. The English version of this book, it’s been published by Ibex Publishers in July 2020.